Selective routing with failover in MikroTik - How?

Selective routing with failover in MikroTik - How?

RouterA & RouterB are running OSPF to each other, the 60ghz path is set to the default cost of 10 and is running BFD, the 5ghz path is a cost of 15
This works perfectly fine for fairly rapid failover for when the 60ghz link dies. Traffic successfully fails over to the 5ghz, all good for the most part

However it never just instantly drops out and remains dropped out when there's rain or a partial obstruction. What actually happens is the link flaps, or just performs like crap, this is very noticeable and very disruptive with VoIP. So what I would rather do is have all VoIP traffic permanently routed across the 5ghz link so it never has to deal with a flapping link situation
I can accomplish this with a simple mangle rule that changes to i.e. 'BackupRoutingTable' which just has 1 route in it - a default route to the IP address on RouterA's 5ghz interface.

Great........ until the 5ghz link fails. RouterB will keep sending VoIP traffic out that interface unless the physical interface goes down, since its a local IP address it's not a loopback
So how do I solve this problem? 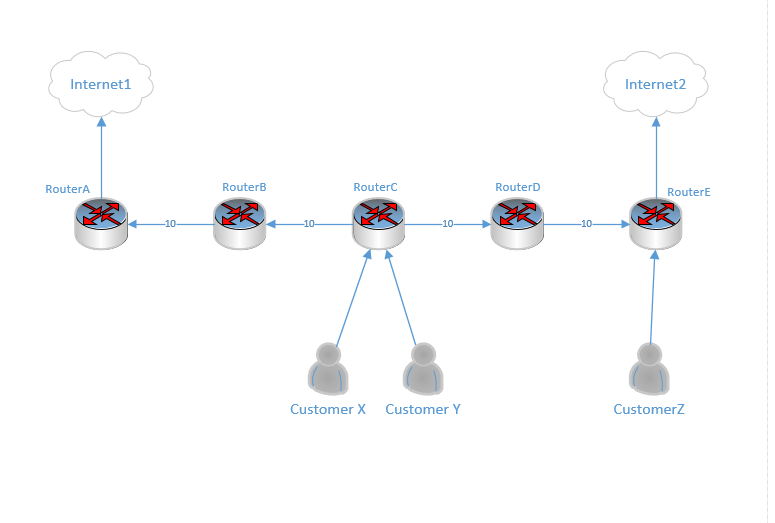 If we can figure out Scenario A it might solve Scenario B as well, but there a potential problem especially if we are using mangle rules
At RouterC it's pretty straightforward to influence the path. If I want all traffic from Customer X to go via Internet1, it'll send to RouterB who will then send to RouterA and out the internet
And all traffic from Customer Y to go via Internet2, it'll send to RouterD->RouterE. This is very simple because RouterB just looks at its routing table and see's the closest path to the internet is via RouterA, and the same with RouterD to RouterE, easy

But what about for CustomerZ? If I have a rule on RouterE that say I want all of his traffic to go via Internet1, it will send to RouterD. But RouterD will see that the closest path to the internet is via RouterE so it'll just send the data back, and then RouterE will send the traffic out Internet2 (or cause a loop by routing it back to RouterD)
Mangle cannot be used here, because connection/packet data does not carry across so there is no way for RouterD to know for sure "oh, this traffic is supposed to go via Internet1" it's just going to look at its normal routing database, it won't use mangle

So what are the possibilities here?
Top

First, I am not a networking wizard so cannot help but, great explanation and diagrams.
Since no other experts have chimed in, I thought I would give my low level responses.

The second scenario, what if Router A gives out the DHCP for customer Z (vlan zzz) , would that then change the routing ??
I'd rather manage rats than software. Follow my advice at your own risk! (Sob & mkx forced me to write that!)
MTUNA Certified, by the Ascerbic Llama!
Top

2nd non-routing export. I am here because anav messaged me...

scenario A, I suggest to use bounding, which respond to line failure quickly, unlike OSPF

scenario B. I think I would use OSPF and let it figure out the best path but BGP , from what I understand, would be quicker to recover in the event of topology change. not something I've done ofcourse so happy to learn something new.

Also you can use mangle rule to force routing decision on top of OSPF (that's the only way I managed to do this) so you can manually divide customers up and decided which customer goes to which gateway. not the best idea in all cases but it worked for us.
MTCNA MTCTCE UEWA
Top

I've managed to get this to work but its a lot of commands and a bit messy. Surely there's a cleaner and simpler way.....


The way i'm accomplishing it at the moment is to
- Create another VLAN and IP addresses on interfaces between routers
- in Route->VRF add those VLAN's with a routing mark like "SendOverBackup"
- Create another OSPF Instance, router-ID can be the same, set redistribute default route to always, routing-table set as before, use DN manually turned 'off' (otherwise routes don't advertise properly)
- Add another OSPF area 0 under that new Instance
- Add IP addresses of those VLAN's in networks
- Setup OSPF interface parameters (higher cost on the 60ghz link so its less preferred)
- Create new interface list and add those VLAN's
- Add mangle rule that marks connections that came in via those VLAN's
Code: Select all
- Add mangle rule to return the traffic through the same VRF, since MikroTik routing will not do this by default

Code: Select all
Now the objective is accomplished of having all data normally go via 60ghz, with fast fail-over thanks to BFD. And the opposite with another OSPF instance running to use the 5ghz as primary and 60ghz as backup with fast failover in the other direction
Now traffic can selectively be marked to always prefer the backup link

I just think this is messy and needlessly complicated with a lot of extra steps to achieve the goal. Does anyone know of a better/simpler method?
Remember, it CANT just be a simple mangle rule to force all traffic over backup. The goal is to have failover in BOTH paths. Just doing a simple mangle rule will mean all traffic will always go via backup path, even if its down and unreachable because they are radio links. Physical interface state will remain up (ethernet to radio) but there's no connectivity (radio to radio), hence this will never failover correctly. OSPF or BGP is needed
Top
Post Reply