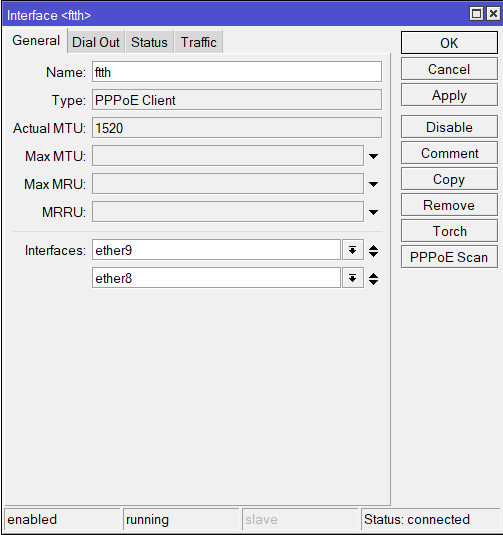 when I do a speed test I get slower and inconsistent results, sometimes it's only 99mbps and sometimes its around 190mbps but I can't reach anything higher than 199Mbps.
I opened up winbox and monitored ether8 and ether9 while doing the speedtest and I noticed that mostly one interface is doing the heavy load and it can't do more than 99mbps but I once saw both of them working at 99mbps.
I'm really curious about what is happening, so can someone explain the reason behind the slower speeds to me ?
Last edited by sadeq on Sat Oct 12, 2019 11:12 pm, edited 2 times in total.
Top

Re: PPoE client on multiple interfaces resulting in slower speeds

In the interface you specify the interface the pppoe client will run
https://wiki.mikrotik.com/wiki/Manual:I ... PoE_Client
I dont know why it lets you select two interfaces... what did you expect by selecting both interfaces? Also in your pppoe client you specify username and password only once... how will it authenticate to both servers with the same username and password???
Just select one intetface.. then create a second pppoe client and choose the other interface..
Use mangles to load balance both your connections...
Top

Re: PPoE client on multiple interfaces resulting in slower speeds

it's a single PPoE client not two, but connected to the PPoE server through two interfaces which are ether 8 and ether9 as seen in the photo,
I don't know how is this possible, thus I'm asking this question
Top

Re: PPPoE client on multiple interfaces resulting in slower speeds

There is no reference in the manual that says you can add 2 interfaces in the PPPoE client...
There is no meaning in what you do... you have one server and one client that should get connected through 1 interface in order for the client to discover the server in layer2.. as simple as that..!
Top
Post Reply